From the nation’s leading law firm representing victims of norovirus and other foodborne illness outbreaks.

When someone talks about having “the stomach flu,” they are probably describing acute-onset gastroenteritis caused by one of the noroviruses, which are members of the “calcivirus” family (Caliciviridae). Noroviruses are entirely unrelated to influenza viruses. 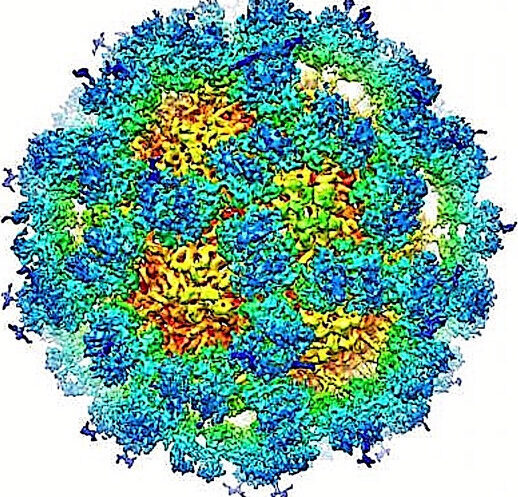 The Centers for Disease Control and Prevention (CDC) estimates that noroviruses cause nearly 21 million cases of acute gastroenteritis annually, making noroviruses the leading cause of gastroenteritis in adults in the United States. Norovirus is highly contagious and transmitted by infected individuals at an enormous rate. It is simple genetically and evolves quickly, and exposure does not lead to lasting immunity. It is estimated that each individual experiences norovirus five times during the course of their life.

The virus, due to its structure, is also very stable in the environment and is resistant to many sanitizers/disinfectants. It is a major concern for several sectors including health care, education, and tourism, and in food, shellfish, and produce. But most foodborne norovirus outbreaks occur in restaurants or institutional food service settings.

According to a review article in the New England Journal of Medicine:

The Norwalk agent was the first virus that was identified as causing gastroenteritis in humans, but recognition of its importance as a pathogen has been limited because of the lack of available, sensitive, and routine diagnostic methods. Recent advances in understanding the molecular biology of the noroviruses, coupled with applications of novel diagnostic techniques, have radically altered our appreciation of their impact. Noroviruses are now recognized as being the leading cause of epidemics of gastroenteritis and an important cause of sporadic gastroenteritis in both children and adults.

As mentioned above, norovirus (previously called “Norwalk-like virus” or NLV) is a member of the family Caliciviridae. The name derives from the Latin for chalice—calyx—meaning cup-like and refers to the indentations of the virus surface. The family of Caliciviridae consists of several distinct groups of viruses that were first named after the places where outbreaks occurred. The first of these outbreaks occurred in 1968 among schoolchildren in Norwalk, Ohio. The prototype strain was identified four years later, in 1972, and was the first virus identified that specifically caused gastroenteritis in humans. Other discoveries followed, with each strain name based on the location of its discovery—e.g., Montgomery County, Snow Mountain, Mexico, Hawaii, Parramatta, Taunton, and Toronto viruses. A study published in 1977 found that the Toronto virus was the second most common cause of gastroenteritis in children. Eventually, this confusing nomenclature was resolved, first in favor of calling each of the strains a Norwalk-like virus, and then simply, a norovirus – the term used today. 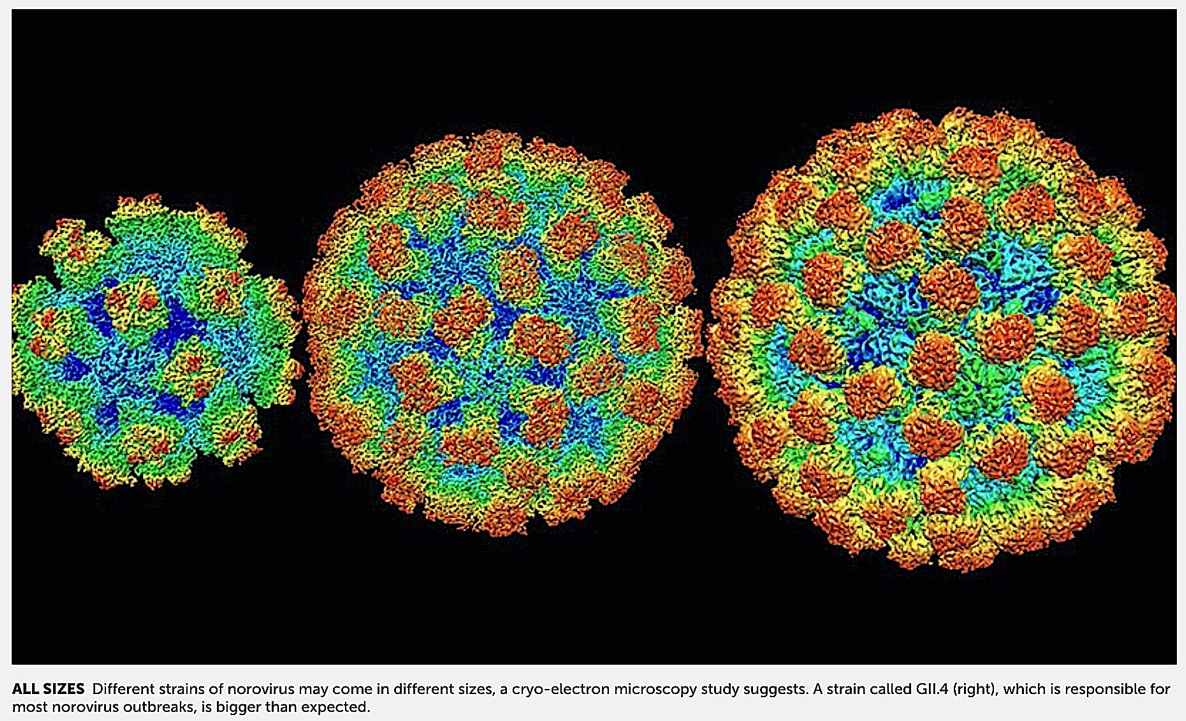 How Common is Norovirus?

Currently, norovirus is the most common cause of acute gastroenteritis in the United States. While bacterial causes of foodborne illness, such as pathogenic Escherichia coli and Salmonella, are often cited as commonly reported sources of food poisoning, noroviruses cause 58% of foodborne illnesses acquired in the U.S. Thus, norovirus is the leading cause of outbreaks from contaminated food in this country.

According to CDC estimates, this translates into about 2,500 reported norovirus outbreaks in the United States each year. Norovirus outbreaks occur throughout the year but are most common from November to April. 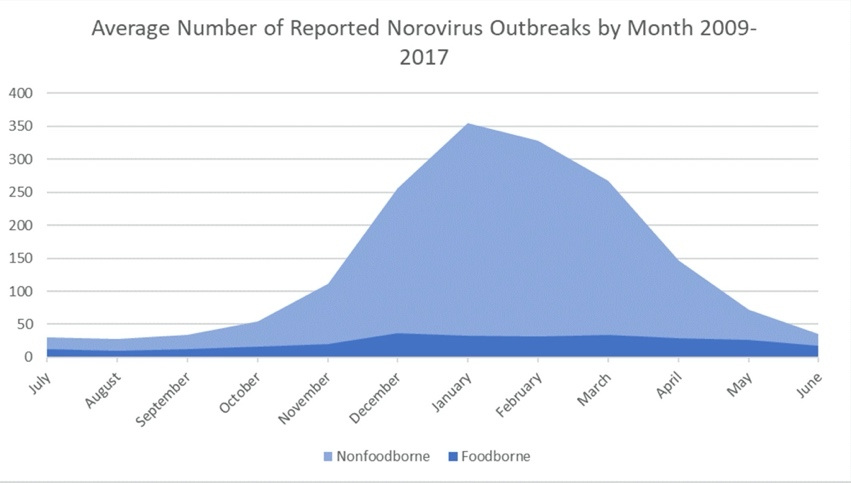 About 1 in every 15 individuals in the U.S. will get norovirus illness annually. By five years of age, one out of every 14 children will visit an emergency room, and one out of 278 children will be hospitalized due to norovirus.

Norovirus outbreaks have been reported in many settings, including healthcare facilities, restaurants and catered events, schools, and childcare centers. Cruise ships account for a small percentage (1%) of reported norovirus outbreaks overall. 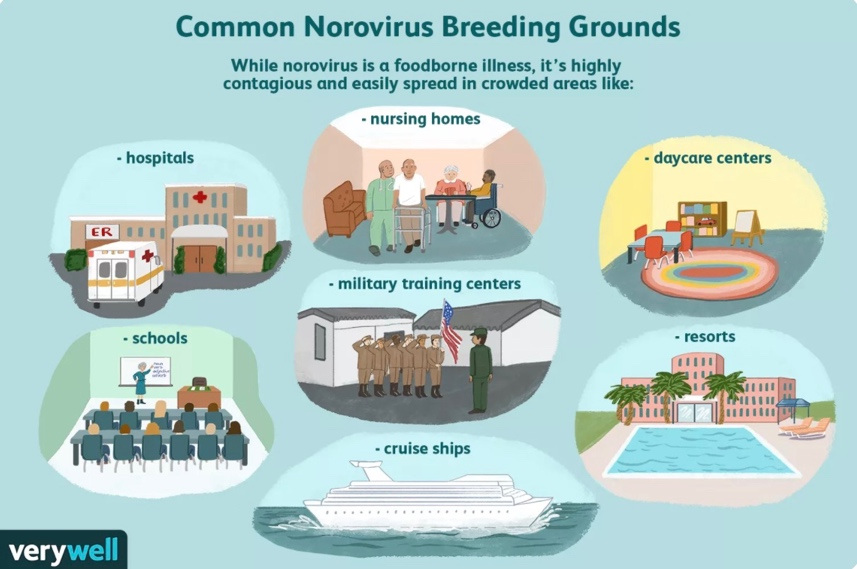 Sources of Norovirus and Challenges Associated with the Virus

In addition to humans, norovirus can infect a broad range of hosts including livestock, pets, and wild animals (e.g., marine mammals and bats). Little is known about norovirus infections in most non-human hosts, but the close genetic relatedness between some animal and human noroviruses, coupled with a lack of understanding of where newly appearing human norovirus genotypes and variants are emerging from, has led to the hypothesis that norovirus may not be host restricted and might be able to jump the species barrier. To date, no animal noroviruses have been detected in human stool, but some serological evidence hints to possible transmission from animals to humans.

In humans, norovirus is transmitted primarily through the fecal-oral route, with as few as 10 to 100 virion particles needed to initiate infection. Transmission occurs either person-to-person or through contamination of food or water. It can also transmit through several other means such as droplets of vomit and fomites (surfaces contaminated with either feces or vomit) contaminated with norovirus. The infection spreads mainly among the people in crowded and enclosed places such as schools, shelters, hotels, resorts, nursing homes, cruise ships, and airline flights, even those of short duration. The probability of norovirus infections is increased among the people with compromised immune systems, as well as people following unhygienic practices.

Historically, food is the most common vehicle of transmission for noroviruses; of 232 outbreaks of norovirus between July 1997 and June 2000, 57% were foodborne, 16% were spread from person-to-person, and 3% were waterborne. When food is the vehicle of transmission, contamination occurs most often through a food handler improperly handling a food directly before it is eaten.

Norovirus is able to survive at a wide range of temperatures and in many different environments. As noted by the CDC in its Final Trip Report:

Noroviruses can cause extended outbreaks because of their high infectivity, persistence in the environment, resistance to common disinfectants, and difficulty in controlling their transmission through routine sanitary measures. 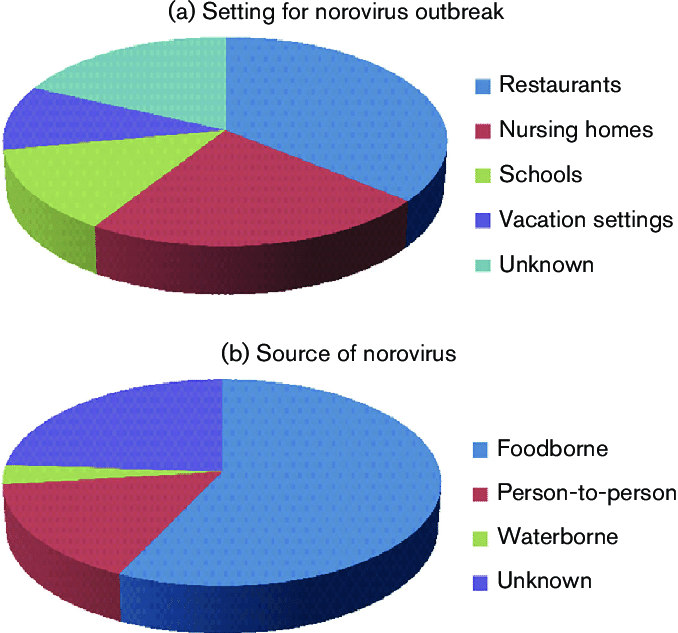 Norovirus outbreaks can result from the evolution of one strain due to the pressure of population immunity. Typically, norovirus outbreaks are dominated by one strain, but they can also involve more than one strain. For example, some outbreaks associated with shellfish have been found to contain up to seven different norovirus strains. Swedish outbreak studies also reveal a high degree of genetic variability, indicating a need for wide detection methods when studying these outbreaks.

Once infected, individuals begin viral shedding in stool and vomitus as soon as eight hours after exposure, with viral shedding peaking four days after exposure and, in some instances, continuing for up to 56 days. Given the high titers produced during viral shedding and the low number of norovirus particles that are needed to establish infection, it is possible that one individual could potentially infect thousands.

Food handlers and health-care workers are considered important contributing factors in the spread of norovirus both in foodborne outbreaks and in person-to-person transmitted outbreaks occurring in healthcare institutions. Several case reports have confirmed the role of infected food handlers in causing outbreaks, and the percentage of outbreaks in which food handlers were involved has been reported to be as high as 34% to 70%. In healthcare settings, nosocomial (hospital-acquired) norovirus transmission is mainly caused by symptomatic shedders, but asymptomatic transmission is not uncommon.

Based on a review of current research conducted by an expert group funded by the Bill and Melissa Gates Foundation and published in 2016, current evidence suggests that the global disease burden of norovirus is high, second only to rotavirus as a cause of severe gastroenteritis in developed countries, with the most severe outcomes among young children and the elderly. Immunity is of limited duration and is strain- or genotype-specific, with little or no protection conferred across genogroups, and any understanding of natural immunity to norovirus remains incomplete. Immunity is not lifelong, with estimates of duration ranging from six months to nine years across various studies. This has made the development of a norovirus vaccine very challenging:

A vexing problem is how to identify when norovirus is disease-causing and then to attribute a fraction of the acute gastroenteritis disease “envelope” to norovirus. For norovirus, attribution has been particularly challenging since detection is based on highly sensitive PCR [analysis] and virus is frequently detected in stool of individuals with gastroenteritis, but also in stool of healthy controls. Reinfection is common and sometimes asymptomatic; viral shedding can persist for weeks or months after symptoms and, fundamentally, we lack a diagnostic that readily discriminates between disease-causing and asymptomatic infection.

These discoveries reveal just how complicated the pathway of norovirus infection is, as well as how difficult it is to define the true period of infectivity. Furthermore, it remains unclear why some people do not become sick with norovirus even when they are exposed. Very little is known about the differences in hygiene practices, behaviors, and personal susceptibility between those who become infected and those who do not, which brings up the potential for more research. Discrepancies exist in the published research about average infective doses for norovirus, with earlier studies having used a much higher dose to trigger immune responses.

From 2008 to 2014, 74 million passengers sailed on cruise ships in the Vessel Sanitation Program’s jurisdiction. Only 129,678 passengers met the program’s case definition for acute gastrointestinal illness and only a small proportion of those cases (1 in 10) were part of a norovirus outbreak.

Food service establishments are routinely linked to foodborne illness outbreaks, and out of the over 9,000 foodborne illness outbreaks reported to the CDC between 1998 to 2004 (a vast underestimation of disease burden), over half (52%) were associated with restaurants or delicatessens. Not surprisingly, noroviruses were identified in almost half of the foodborne outbreaks when a specific cause was determined, and restaurants were by far the most common setting/source for these outbreaks (64%). These findings have led the CDC and others to call upon the food service industry to instigate preventive measures and policies to curtail norovirus transmission in their facilities.

Yet noroviruses are especially difficult to manage once introduced into a retail foodservice or grocery facility. Sometimes described as the “perfect human pathogen,” these viruses are able to last for up to two weeks on surfaces, are resistant to most commercially available disinfectants, and are easily spread by touch. Only a few virus particles are needed to make someone sick. In the case of a retail food setting, the presence of a single norovirus-infected staff member or customer can, within hours, lead to numerous cases of disease in the local population. Logistically, this results in staff absences, temporary closures of facilities for disinfection, and the need to dispose of potentially contaminated food, although there are also broader impacts such as legal expenses and damage to brand.

The history of norovirus outbreaks has led the CDC and others to call upon the restaurant industry to instigate preventive measures and policies to curtail norovirus transmission in their facilities including handwashing, cleaning, and sanitizing, and implementing employee health policies.

If you have questions about foodborne illness, your rights or the legal process, we’d be happy to answer them for you.